Posted by 2012thislandisyourlandseatosea on June 22, 2012
Posted in: Uncategorized. Leave a comment

The plan is to start off, each morning, mouthful of oatmeal porridge, a glimpse  over to the birdfeeder..yes a hummingbird is doing his thing.

This place, that has been so scary to come home to,  has turned out to be a kind-of -paradise.  Stephen, whom I totally trusted ..told me this  …,. year after year,  finally this concept  has stuck.

Billy((SB) says there’s not such a thing as a stupid question, then he opens the top of my BBQ(after a measured moment of surprise…”it could be cleaned once in a while”. he says politely, with a chuckle), and 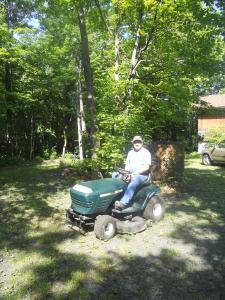 bends over to  set in my new propane tank demonstrating the most NB principle of mechanics re:  a universal truth…..to open or close any tank……LEFTY LOOSY/RIGHTY TIGHTY.

My big issue is power hosing the decks and then painting them.

Big Bill, was kind enough to illustrate some of the techniques that I could use,  then told me of his other interest..OPERA.

Small Bill  is such an altruistic individual, so  available to help anyone, at any time(as well as being a Volunteer Mckellar Fireman; he reads so much, is so cognizant of so much…so unassuming (he has a handle on something called meekness.. that great.Billy Meek).

and in case you did not get it, the meek do inherit the earth.  They do.

The Greek interpretation of meek:  gentle/ considerate/ unassuming.  This is the opposite of arrogant and self-satisfied.

The meek person has put all the sensitivity about oneself aside…has grown to a place that puts defensiveness..and all that stuff aside……good old Billy Meek.

Stephen did not give me a legacy of  “stuff”…he left me with kind people like Billy & concepts rich in meaning.